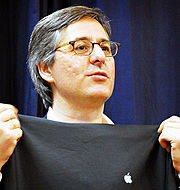 Dan takes no prisoners. Every big tech company is fair game, and he calls it like he sees it. Something that he cannot do at Forbes. The Fake Steve blog now generates a nice 1 Million pageviews per month.

Some snippets that caught my funny bone:

Anyway. Tune into his blog for more laughs.