All Joe Thornton, All The Time 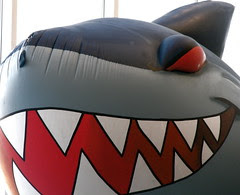 My wife and I love the San Jose Sharks. We share season tickets with a set of family and friends. The Sharks fans really know how to support their team and make every game a fun event.

We attended last night’s game against the Dallas Stars. And won in overtime. I’ve gotta say. The overtime victories, where you come from behind to tie it and force the overtime, then go on to win it decisively in overtime, are the best!

The San Jose Mercury News covers it well. The first period was a sleeper, with the Sharks looking like they were on Spring Break, but the final two periods (and the ever-so-brief overtime) was hockey bliss.

My favorite player, the one on my Sharks jersey, is Joe Thornton. The man is an assist machine. Last night, he:

Thornton is worth every penny.

This was a key victory.