Scott Adams on Dilbert at EclipseCon 2007 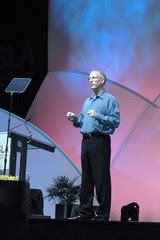 Scott Adams, creator of Dilbert, did a great job with the EclipseCon 2007 Keynote talk on Tuesday.

While the talk was certainly entertaining, the thing I liked most about his talk was the focus on things like "failure", "timing","luck", and "persistence".

Scott pointed out that his "list of failures" got to 29 items before he stopped counting. Of those 29 failures, most would have been successes had they been shifted forward or backward in time by as little as 5 years. As I've said before, timing is everything. Startups are often too early to market. Lots of VC-backed startups do not have the patience to wait for the market to catch up to them. Patience.

In addition to his 29 failures, Scott did recognize 3 successes. And, certainly, a bit of luck played a part in the successes.

However, Scott's spin on "lucky" and "unlucky" people was interesting. Lucky people are those that expect success to happen to them and, as a result, they have a broader perspective of the world around them. Unlucky people do not expect success and often miss the signs that would otherwise drive them toward the right opportunity. Interesting. Don't forget to look around.

Finally, don't ever give up. Be persistent. Create a "product". Create lots of products. Something will eventually stick, perhaps with that component of "luck" playing its part when you least expect it.

Nothing in here about Eclipse or EclipseCon 2007. Still, very well done, informative and entertaining.

Be sure to take a look at the Dilbert Blog.

Posted by Brian Berliner at 2:11 AM